While watching television one night, Jamie Cochran was struck with an idea. The news featured two East Coast women and the waterproof crocheted mats they made to keep homeless people in their town warm and dry. 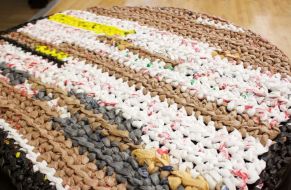 As federal programs secretary for Reynolds School District, she knew of many students who were considered homeless. So Cochran decided to bring the waterproof mat idea to her community.

“I thought it would be a cool because it would not only keep the plastic out of the landfills, but also help families at the same time,” Cochran said. “I put out a notice asking for people to send in plastic bags, and ended up with thousands and thousands.”